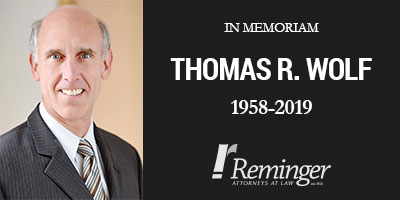 It is with profound sadness that we share the passing of our dear friend and beloved colleague, Thomas R. Wolf.  Tom died peacefully on Sunday, November 24, 2019 after a courageous battle with cancer. Exuding class, style, and an innate sense of genuineness, Tom handled his terminal diagnosis in the same fashion.

Tom embodied hard work, perseverance and grit. He started his career as a tradesman in the sheet metal industry prior to studying at Baldwin-Wallace College and receiving his Bachelor of Arts Degree in Business Administration.

Tom joined Reminger as an attorney upon graduation from law school and remained with us for his entire career. He enjoyed working on a diverse range of matters. Tom leveraged his skilled labor background and handled a variety construction liability matters. He represented numerous national companies in commercial premises liability cases, including professional sports teams and their venues. He prevailed on an issue of first impression before the 8th District Court of Appeals concerning liability for sporting events in the case of Rees v. Cleveland Indians.  Tom also represented manufacturers, suppliers and middlemen in toxic tort litigation, including the representation of asbestos, silica and benzene defendants in cases in various courts throughout Ohio.  In fact, Tom served as the Chair of Reminger’s Environmental/Toxic Tort/Class Action practice group.

Tom was licensed to practice in Tennessee. He and his wife Diane had purchased a home there several years ago, which is where he had planned to eventually retire.

Outside of work, Tom was involved in community activities, including chairing a fund raiser for the MetroHealth Cancer Care Center for two years, participating in Habitat for Humanity projects, as well as other volunteer activities through the local bar associations. He was an avid runner, enjoyed golfing, and loved his dogs.

We are privileged to have known and worked with Tom. Reminger would like to express our deepest condolences to Diane, his brothers and his sister, his stepchildren and grandchildren. Tom’s passing is a great loss to our Reminger family and to the profession of law.

Visitation has been set for Saturday, November 30th at Waite & Son in Brunswick, Ohio, from 2 pm – 5 pm.