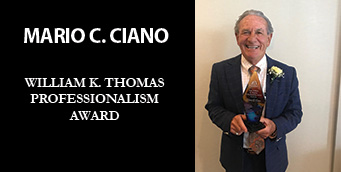 CLEVELAND, OH – Reminger Co., LPA is proud to announce that Mario C. Ciano was honored with the William K. Thomas Professionalism Award by the Cleveland Metropolitan Bar Association at their Annual Meeting. The award is bestowed on “a lawyer or judge who has significantly contributed to the enhancement of professionalism in the Greater Cleveland legal community by exemplifying the goals of the Ohio Supreme Court’s ‘A Lawyer’s Creed’ and by furthering the ideals (of) the mission of the CMBA.”

Mario was selected by CMBA’s ethics and professionalism committee. Both Mario and Susan Becker were honored as the 2018 recipients of the prestigious award.

Mario joins a long list of respected leaders in the legal community. He was nominated by multiple people for his service in the field of law, his work in the community, and his dedication to helping with private placement adoptions.

"While Mario is known to many for his roles as the former Managing Partner of Reminger Co., LPA and as an extraordinary lawyer, his storied legacy transcends the courtroom. He has enriched many lives, not only by virtue of his professionalism, but also through his embodiment of determination, compassion, and generosity," said Reminger Managing Partner Stephen E. Walters.

Born and raised in southern Italy, Mario was brought to the United States by Catholic Charities with a group of post-war orphans when he was just 9 years old. He was adopted by an Italian-American family and immersed himself in school and sports with great success. Mario attended Case Western Reserve University for both his undergraduate and law degrees. He joined Reminger & Reminger as a law clerk in 1966, and officially as a lawyer in 1968. Mario built a formidable legal practice as a notable trial attorney, marked by his trademark persuasive and articulate performance in the courtroom.

Mario has been recognized and included among the 'Best Lawyers in America' for the last 25 years. He has been featured as one of the 'Leading Lawyers' by Inside Business Magazine and is a member of the Federation of Defense and Corporate Counsel and Defense Research Institute. He is also a faculty fellow for the National Institute of Trial Advocacy and a life delegate of the Eighth Ohio Judicial District. He frequently lectures to peer groups on various issues covering professional liability, trial tactics, litigation management, and Alternative Fee Arrangements.

Despite all of his accomplishments, Mario would say that the most rewarding work he has done has been in the area of private placement adoption. Throughout his career, Mario has demonstrated his deep gratitude for those people who took him in and cared for him. He has done so by donating over the past 25 years countless pro bono hours privately placing children for friends, colleagues and clients, guiding them through agencies and probate courts to ensure each child is united with their adopted parents at birth.

“Mario is passionate about client satisfaction and client development and helps guide the firm in these areas, said Walters. “He walks the halls, greeting people by name and embracing them with a warm, generous hug that lets them know he truly cares for those with whom he works. It is this sort of grace and professional attitude that is precisely why we are so proud of Mario and believe that acknowledging him with this award is so appropriate – especially this year in his 50thanniversary of serving the legal community.”

About Reminger, Attorneys at Law:

Reminger Co., LPA is a full-service law firm with fourteen offices throughout the Midwest: Cleveland, Cincinnati, Columbus, Akron, Youngstown, Sandusky, Toledo, Fort Mitchell, Lexington, Louisville, Indianapolis, Fort Wayne, Northwest Indiana and Evansville. With more than 130 attorneys collectively, Reminger's practice areas include all aspects of litigation, along with corporate, tax, real estate and probate matters. Our fundamental objective in all the legal services we provide is to obtain the best possible results for our clients in the most practical and efficient manner possible. For more information, visit Reminger at www.reminger.com.