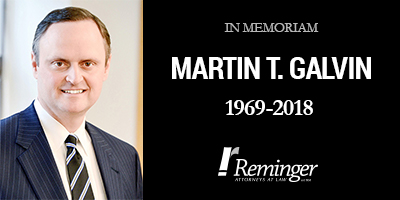 With deep and profound sadness, Reminger Co., LPA mourns the passing of our dear friend and partner, Martin Galvin. Marty, as he was known to everyone, died peacefully on March 7, 2018 at the age of 48 with his wife by his bedside.

Marty graduated from Saint Ignatius High School then continued his studies at American University in Washington D.C., where he graduated with a bachelor’s degree in Political Science. Marty received his Juris Doctor degree from The Ohio State University, where he was actively involved with the ABA National Moot Court Team and the Ohio State Journal of Dispute Resolution.

We met Marty when he joined Reminger in 2001. Marty focused his legal practice on appellate advocacy, professional liability, and business and employment litigation. He served as Co-Chair of Reminger’s Appellate Practice Group.  Over his career, he tried dozens of lawsuits and briefed and/or argued more than 100 cases in the Ohio courts of appeals, which included appeals in almost every Ohio appellate district and the Ohio Supreme Court.  He also participated in cases in federal court, including the Sixth Circuit Court of Appeals and even the United States Supreme Court.

Marty took great pride in his vocation as an attorney and advocated zealously on behalf of his clients. He was highly regarded by his peers, as evidenced by multiple honors bestowed upon him. He was recently honored by The Academy of Medicine of Cleveland and Northern Ohio with the Presidential Citation Award, which was a testament to the guidance he provided to the organization regarding legal issues impacting tort reform laws in Ohio.

While Marty built a great reputation as an appellate advocate, he  was also very involved and respected in Northeast Ohio’s Catholic and Irish communities. He was a past president of the Lawyers’ Guild of the Catholic Diocese of Cleveland and an active member of the Irish American Law Society of Cleveland.  In 2016, he participated in a symposium in Ireland where he presented a mock oral argument before justices of the Irish and Ohio Supreme Courts.

Although Marty had many impressive and significant accomplishments, the most important one to him was his family. He is survived by his wife, Tracy, and his two children, Fiona and Tommy.

We are privileged to have known and worked with Marty. His passing is a great loss to our Reminger family and to the profession of law.