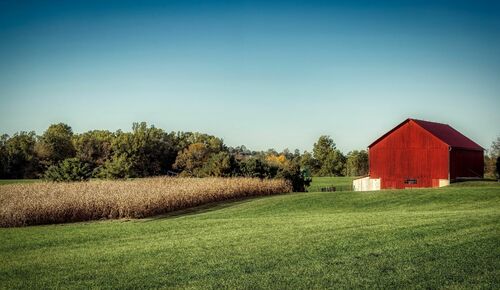 The great State of Ohio has more than thirteen million acres of farmland.[1] (Also, it appears none of those acres are devoted to buckeyes?!). The average age of an Ohio farmer is 55.8 years and 30% are 65 years or older.[2] Of Ohio’s 128,000 farmers, more than 70,000 are involved in estate or succession planning decisions.[3] These numbers suggest a lot of farmland will transfer ownership to the next generation during the coming two decades.

Two recent decisions demonstrate that estate planning language needs to be precise for farms; or, your beneficiaries could be in litigation until the cows come home. Both cases involve one beneficiary’s option to purchase the farm based on the term “agricultural use value.” The two districts came to different conclusions on the valuation—signaling there could be more disputes down the road.

For all the city folk out there – we need to define an important term in the world of Ohio farm valuation. “Current agricultural use value,” or CAUV, refers to farmland’s property-tax valuation—usually 60-70% less than “fair market value.” The Ohio Department of Taxation publishes CAUV Tables annually based upon soil types.

Last year, in Fahncke v. Fahncke, 2020-Ohio-433, the Third District Court of Appeals reversed the Auglaize County Common Pleas Court’s granting of summary judgment. Richard and Rosalyn Fahncke deeded their 247 acres of farmland to their 7 children, and all parties entered a contract granting one son, Keith, an option to purchase the farmland at both parents’ deaths. The option provided that Keith would pay a percentage of a price determined via an appraisal using the land’s “agricultural use value,” so long as Keith would farm the land. The siblings disagreed on the farmland’s valuation.

The lower court held that the phrase “agricultural use value” could not mean CAUV. If they meant CAUV, they would have said “current.” Furthermore, the contract called for an appraisal, so, the parties must have intended for the appraiser to determine fair market value, because CAUV can be looked up on a chart. The lower court held the contract was unambiguous and must mean full fair market value. The appellate court reversed. The lack of the word “current” was not dispositive, and the appraiser’s job was to determine only whether Keith was using the land to farm—which he was. The appellate court reasoned that Richard and Rosalyn’s estate plan intended to permit multi-generational farming and was designed to avoid federal estate taxes and that “agricultural use value” must mean CAUV, because any other value would defeat that intent. The Ohio Supreme Court declined to hear the case.

A Fifth District decision from Stark County Probate Court dealt with the same phrase. In Nichols v. Bixler, 2021-Ohio-129, Jo Bixler’s trust provided that his son, Jeffrey, had the first option to purchase the 290 acres of farmland after Jo’s death “based on the agricultural use value of said real estate.” Jeffrey argued this meant CAUV of approximately $600,000, and the other beneficiaries argued for a certified farm appraisal of $2.1 million. The probate court held the term “agricultural use value” was ambiguous and heard extrinsic evidence to interpret it. At a hearing, Jo’s attorney testified that he reviewed with Jo the difference between fair market value, taxation values, and CAUV, and that Jo meant the price to be “what it would sell for between two farmers” on the open market. The trial court reasoned this higher valuation fulfilled the overall intent of Jo’s estate plan to provide for his other beneficiaries: Jeffrey would pay the higher price into the trust, which would distribute to the others. After considering testimony from competing appraisers, the probate court set the price at $1.8 Million. The appellate court agreed that the term “agricultural use value” was ambiguous and, based on the hearing’s evidence, the term could not mean CAUV.

If you are engaged in estate planning for farmland, administering an estate/trust containing farmland, or even a beneficiary of farmland, contact Reminger’s experienced Estate Planning, Probate & Trust attorneys.

The author thanks Timothy Gallagher and Paul Shugar for their assistance with editing.