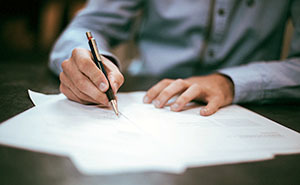 Great wealth, in the trillions of dollars, will be transferred from one generation to the next as our population ages.  While most estates proceed as intended, there will always be greed and dysfunction among a small percentage of American families; so much so, that business for attorneys skilled in the pursuit or defense of estate disputes will be plentiful, as the number of disputes centered on challenges over the rights to a decedent’s assets will explode in the years to come.

Let’s discuss the structure of an Ohio post mortem dispute, in an attempt to help an affected beneficiary sort through the bevy of emotions and questions associated with being disinherited by a loved one.

First, the ‘why’ and the ‘how.’ If you have ever tried to untie a knot, you know that it is impossible to untie it by pulling on both ends of the string.  Clients who believe they have wrongly been disinherited often approach us with a wide range of emotions (the “why”), triggered by questions surrounding missing money, unbelievable beneficiary designations, or the existence of a will or trust that reduces or eliminates an expected share.  If a sibling, for example, has caused this to happen, feelings of guilt, betrayal, and sadness, frequently and so pervasively invade the client’s mind (fixation on the “why”). This makes it difficult to sort through the noise and prevent pulling on the correct string necessary to solve the problem.  So, if you have been disinherited and want to begin to make matters right, the first step is to figure out “how” it happened.

Did the Decedent intend to reduce or eliminate your share? There is a widely held belief, grounded in concepts of freedom and property rights, that we are all permitted to dispose of our assets in any manner that we may choose.  Professionals like attorneys, accountants, brokers, and bankers, often internalize and drown in the concept to the point of blindness that some persons are so highly susceptible to abuse and exploitation, that decision-making is suspect.  In contests over bank accounts, will and trust executions, or beneficiary designations, such professionals will paper the transactions and arrogantly proclaim they were the product of free will and intelligence, despite glaring evidence to the contrary available for the asking.  It is this blindness, lack of questioning or concern for the plight of our at-risk population, that enables the act of disinheritance.  It also forges the basis upon which the challenger can plan a strategy to demonstrate lack of capacity or failure of free will.

Is there a path to recovery?  The answer to this question can be very complicated and depends on an understanding of the mechanisms by which assets can be diverted from an expected beneficiary.  I frequently provide to my clients an example to help explain this point: imagine an elderly mom with a loving daughter and son.  In this example, mom is both competent and loves both of her children.  She wants to divide her estate equally between her children.  On Monday, she visits her lawyer with both children, expresses that intent and executes her last will and testament, naming both of her children equal beneficiaries.  On Tuesday, with the full knowledge of the son, the daughter takes her mom to the bank so that she can assist with the day-to-day management of mom’s affairs.  The banker innocently suggests it would be easier to place the daughter on the mom’s sole bank account as a joint tenant and so she is added to mom’s account.  Mom dies on Wednesday.  Even though Mom demonstrated no intent to disinherit her son, the effect of the joint tenancy is to cause mom’s only bank account to pass, at death, to the daughter, thus bypassing the decedents’ estate and bequests under her will.

If another layer of complexity is added to the example such that on Tuesday, after the daughter took her mom to the bank, she secretly hired a new lawyer to create a new will that left everything to daughter, the son still has a path to recovery.  In this revised example, the son would not only have to successfully defeat the joint tenancy, but would also have to prove that the last will and testament was the product of undue influence or lack of capacity.  Fail in either one, and son ends up with nothing.  The same analysis could apply to successive beneficiary designations, gifting, abuse under a power of attorney, exploitative business transactions, and virtually unlimited possibilities.

What should you do if you believe that you have been disinherited? In the best case, you could pick up the phone and call the purported wrongdoer and resolve the issues amongst yourselves.  Unfortunately, rarely does a phone call or face-to-face meeting result in any value. Instead, attempts are often met with evasion, refusal to disclose material information such as the existence of assets, and failure to detail a full account of what occurred.  You would be wise to consult a lawyer to help you make informed decisions regarding the potential of recovery, costs of pursuit, and the pinpointing of a strategy, especially because there may be time limitations that if missed, would cause the forfeiture of a claim.

Inheritance disputes can be very complicated.  They almost always involve the intersection of legal capacity, the concept of the exercise of undue influence (which is usually perpetrated in the dark), and the mechanisms of asset ownership and estate planning instruments.  Overlaid with such issues are typically those relating to family dynamics, the rules of probate practice and estate/trust administration, and all that comes with it.  Usually, a professional such as a lawyer or banker will have witnesses and support the transaction.  Nonetheless, a lawyer knowledgeable in the world of estate disputes can guide you toward the discovery of evidence and provide you with sufficient information to enable you to make informed decisions as to how you want to proceed, if at all.