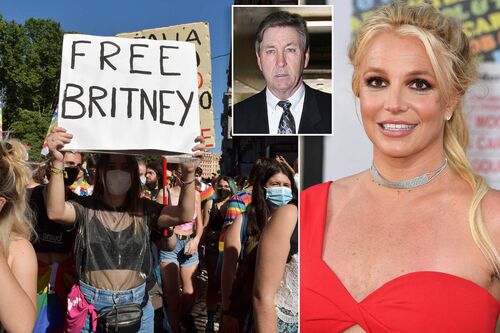 Unless you have been under a rock or on a desert island, you have probably heard that 90s pop star Britney Spears has been under a conservatorship since 2008. Britney’s father, Jamie Spears, currently has control of Britney’s $60+ Million empire. Prior to 2019, he was also solely in charge of Britney’s personal decisions – including where she lived, her medications, and access to her social media accounts. That role is now filled by Jodi Montgomery, a professional conservator.

In the past few years, Britney has fought back against the conservatorship. In 2019, she cancelled her upcoming prestigious Las Vegas residency and refused to perform again until her father was removed from his roles. Britney’s fans rallied worldwide with the “Free Britney” campaign on social media and in marches outside the Los Angeles County Probate Court. Even the non-Britney fan became aware of the dozen-year-long conservatorship through Framing Britney Spears, which streamed on Hulu in early 2021.

Britney’s fight culminated in two recent court appearances (via phone), during which time Britney relayed to Judge Penny her frustration, anger, depression, and dissatisfaction with the ongoing control over her life. Britney testified that she has limited ability to associate with friends and her long-time boyfriend, she cannot control her own reproductive health or medications, she does not have full control over her social media, and she wants the conservatorship to end. At the time of this testimony, Britney was represented by Samuel Ingham, III, a court-appointed lawyer. Shockingly, Britney testified that she did not know (meaning her lawyer may not have counseled her) that she can apply to terminate the conservatorship.

Perhaps you remember the now famous photo of a wild-eyed Britney sporting a recently self-shaved head shouting menacingly at paparazzi? That was in February 2007. Britney has since said that the very early stage of the conservatorship in 2008 may have helped protect her when she was most vulnerable due to pressure from paparazzi and a public child custody dispute. But now, Britney can care for herself.

To obtain conservatorship over Britney’s person – her medical decisions, housing decisions, and other personal matters – Jamie had to prove by clear and convincing evidence that Britney was “unable to provide properly for [her] physical needs, including: health, food, clothing, or shelter.” Calif. Probate Code § 1801(a). To gain control over Britney’s estate – her financial and legal affairs – Jamie had to prove that Britney was “substantially unable to manage [her] own financial resources or resist fraud or undue influence.” Calif. Probate Code § 1801(b). Jamie apparently met those burdens on a temporary basis in February 2008 and a permanent one in October of the same year. That vested Jamie with full control over all aspects of Britney’s life.

So, what has Britney been doing since the start of the conservatorship in 2008? Britney has continued her work as a very famous, very successful, international pop star:

That is a lot of complex work and travel for a woman deemed “substantially unable” to manage her own finances and “unable to provide” for her own health and personal care. Perhaps this all brings new meaning the lyrics of Britney’s “I’m a Slave 4 U.” Most heartbreaking of all, Britney testified that if she did not perform as demanded, her conservators would keep her from her children.

All this time – Jamie and his lawyers are being paid with Britney’s money to manage her life. Jamie’s salary is reportedly $16,000 per month for his role. In the last eight months alone, Jamie’s lawyers received $1.5 Million in fees. Jodi Montgomery – the recently-appointed conservator of the person – and her attorneys are also paid with Britney’s money, a fee that is averaging Britney $19,000 a month since November 2019. Remember Britney’s court-appointed lawyer, Mr. Ingham? He’s received over $500,000 in the past 2 years of service as Britney’s counsel.

In mid-July 2021, the Court granted Britney’s request to retain her own counsel. Through her new attorney, Britney is formally petitioning the court to end her conservatorship and to charge her father with conservatorship abuse. The petition must state the facts that demonstrate the conservatorship is no longer necessary. Jamie Spears, Jodi Montgomery, and Britney’s relatives have the ability to object to the petition. Thereafter, the probate court must set the matter for a hearing – and, if Britney demands it, that hearing must be to a jury. Calif. Prob Code § 1863(a). Which brings us to the real question: does Britney Spears even have peers, or is she in a class of her own?

Want to learn more about the conservatorship and the legal battle Britney is in for control of her life? Please join me on August 18, 2021 from noon-1 p.m. for a CLE covering this topic. The event is via zoom and co-hosted by the Akron Bar Association and the Cleveland Metropolitan Bar Association. You can register on CMBA’s website or the Akron Bar’s website.

Jessica thanks Brittany Kaczmarczyk, Joseph Hendlin, and Valera Ghali for their research assistance.